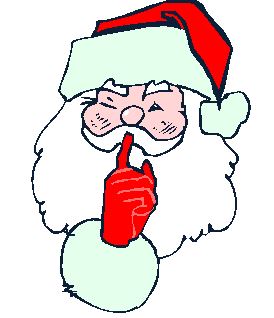 But it’s more important now than ever, at a time when public trust has cratered to an all time low, for elected officials to maintain an obligation to rebuild the trust, and that is done not through a fast-tracked process but through proper deliberation and full disclosure.

The holiday rush is upon us–a time when many people are busy and distracted, with no time to monitor what lawmakers in Trenton are doing during the final weeks of December. You know what that means, right?

Last minute Committee Hearings and Voting Sessions packed with bills that, under normal circumstances, would receive far more scrutiny and attention. Buckle up, New Jersey–Santa Claus is coming to Trenton, and the one thing he’s not packing onto his sleigh is transparency in government.

For example: the controversial push to allow Horizon to convert from a non-profit insurance provide to a for-profit entity. Supporters are quick to point out that the bill has been around for over year, but opponents counter that the current incarnation still hasn’t received the proper vetting, and while there may be no perfect time to move complicated legislation, there is certainly no WORSE time for residents of New Jersey than the last two weeks of the calendar year. There’s been some great coverage of these bills; here are some articles to read if you want to get fuller picture of what’s being proposed:

There’s also a great piece from InsiderNJ that includes an interview with former Assemblyman John Wisniewski, who noted the unsettling fast-tracked nature of this particular bill: “There’s no reason the legislative process should be rushed. The structure of Horizon has been a public trust and opening a new business model raises a host of concerns. There is a lot of money and there a lot of agendas, and that is what is at the heart of this, which is the fact that Trenton is a transactional place where things happen for a reason. There’s always quid pro quo. At its heart this legislation is illiberal, in that it takes quality healthcare and affordable rates and turns it into a for-profit entity, which appears to be walking away from the core principle.” The quote at the start of this blog post is taken from the same interview. You can read the full article HERE.

The Horizon bill is just one of dozens of bills up for a vote tomorrow–yes, during a blizzard–in both the Senate and the Assembly. The Assembly session is scheduled to be remote, but as of this morning, the Senate Session is still listed as taking place in the Senate chamber. [UPDATE: The new calendar posted at 9:42am indicates the Senate Session will take place remotely.]

Santa IS bringing some good news for cash-strapped New Jerseyans who have exhausted all unemployment benefits:

A5151/S3283 provides eight weeks of emergency unemployment
insurance benefits during the period from December 22, 2020 to
February 27, 2021 (or to the calendar week in which total expenditures
of emergency UI benefits first exceed $350 million if the conclusion of
that week occurs before February 27, 2021), to individuals who exhaust
all other UI benefits (state and federal). The bill applies to all workers in NJ, those who received Pandemic Unemployment Assistance (PUA) benefits (which includes self-employed workers/independent contractors, and other workers who are not typically eligible for regular State UI benefits.) The amount of the weekly emergency UI benefit paid to an individual will be the same as the amount the individual was paid in regular State UI benefits, or in PUA benefits, as applicable.

Unfortunately for NJ taxpayers, it’s not clear how the state plans to pay for these extra benefits–these bills were only just introduced 6 days ago–but they’ve already garnered strong bi-partisan support (Minority Leader Bramnick is a one of the prime sponsors) and the bills sailed through their Committee hearings unopposed on Monday, Dec. 14th. They’re scheduled a full vote tomorrow in both Houses and I expect they’ll be signed quickly–right in time for Christmas, and leading into the 2021 election year when all seats in the NJ Legislature are up for grabs.

Also announced yesterday, and being heard on Friday, Dec. 18th pending introduction and referral (aka Not Available Online Yet for Public Review) is the NJ Economic Recovery Act of 2020 (S3295/A4), which is being touted as “a comprehensive economic recovery package that will support small businesses, drive sustainable economic growth, and reform our tax incentives system.” No concrete details are available as of this writing because the bill hasn’t been posted online yet–although public comment on the bill is due by tomorrow at 3pm. Politico has some additional info, which you can read HERE. [Update: As of 1:22pm on Wednesday, the bills are still not posted online for public review.]

In addition to the bills mentioned above, I think we can expect a few more “December surprises” in the days ahead. The Legislative Calendar posted late last night added a Quorum call for both the Senate and the Assembly today (which is when new legislation is filed with the Clerk), and two Voting Sessions have been added for Monday, December 21st. The full Board List for the Senate & Assembly sessions have yet to be announced, but the Assembly is already slated to vote on A4 that day, even though the bill hasn’t been heard in Committee yet or released online for public review, other than the official press release from the bill’s sponsors.

A Call for Transparency as Legislative Activity Ramps Up

How to Track Legislation: Part 1 Subscribing to Email Notifications